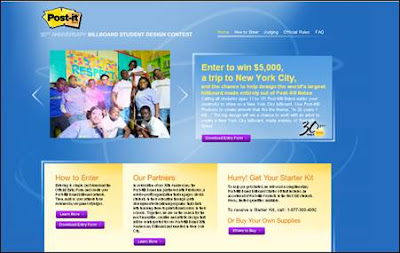 Calling all students ages 11 to 18!
The Post-it Brand 30th Anniversary Billboard Student Design Contest is launching this week!
To help showcase the creativity, innovation and imagination of today’s youth, the Post-it Brand is teaming with not-for-profit organization Publicolor, to search for the country’s most innovative, creative student artwork to serve as the design inspiration for the world’s largest billboard made entirely of Post-it Notes.
Students ages 11 to 18 are invited to create colorful “billboard artwork” made from Post-it Products that fits the theme, “In 30 years I will…”  The most original, compelling and innovative entry will receive:
o    The Post-it Brand 30th Anniversary Billboard will be unveiled in Grand Central Station’s Vanderbilt Hall in August 2010 by a high-profile celebrity.
Detailed information about the contest as well as the downloadable Official Entry Form can be found at the Post-it 30th Anniversary Billboard Student Design Contest Web site:
www.Post-it.com/billboard
-Courtesy of Post-it
Posted by Mary512 at 12:00 AM