Susan Zeidler is an entertainment journalist who just released a novel for tweens and teens called The Practice Room.

Journalist Weaves Music and Fantasy into Story for Teens
Susan Zeidler has spent more than 20 years writing about the “real world” as an award-winning journalist covering events from major court cases and oil spills to movie premieres and the Academy Awards. She now takes her readers to magical places in her first novel, The Practice Room.
In The Practice Room, Zeidler melds her experiences as both a musician and a chronicler of current events in an exciting fantasy that reflects an otherworldly musical voyage of a young teen girl against the background of modern historical milestones.

The story takes the reader and the main character, Zoey, back and forth between worlds and settings as varied as a Los Angeles rock concert in 2002, Harlem in the 1930s, Woodstock in 1969, and the fall of the Berlin Wall in 1989. Zoey's journey not only tells the story of one teen’s coming of age and growth as a musician, but also shows how music transcends all boundaries.
While The Practice Room may seem a departure for Zeidler, it is just an extension of her life’s journey. Throughout her career, she has always had a foot in both the business and creative worlds. While writing about some of the world’s most momentous events as a news reporter, Zeidler continued to hone her craft as a musician and a writer of fiction.
While growing up on Long Island , she developed an early love for the arts. Zeidler studied piano and later went on to delve deeply into jazz. As a musician, she has performed around the world in cities as varied as Oslo , Norway ; Manhattan and Los Angeles . She has additionally written two screenplays, “Tailspin” and “Hit Single.”
Susan Zeidler holds a B.A. from State University of New York at Albany and an M.S. from Northwestern University 's Medill School of Journalism. She lives with her husband and daughter in Southern California .
The Practice Room by Susan Zeidler (Wasteland Press, November 2009, ISBN: 978-1-60047-365-4, $12.95)
For more information, visit www.ThePracticeRoom.com

-Courtesy of The Practice Room by Susan Zeidler 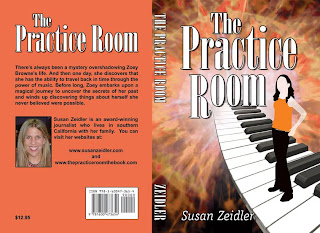 The Practice Room is a delightful book for tweens and teens about a girl who has the ability to travel back in time through the power of music.
This book is an enjoyable story and I loved reading it even though I am not a tween or teen!
With settings as varied as the Berlin Wall in 1989, Harlem in the 1930's, an LA rock concert in 2002, and Woodstock in 1969, this book tells the story of one teen's coming of age. And not only that, but her growth as a musician and how music erases all boundaries.
The Bottom Line: This is the perfect book to pick up this holiday for your music loving teen or tween... or beyond!