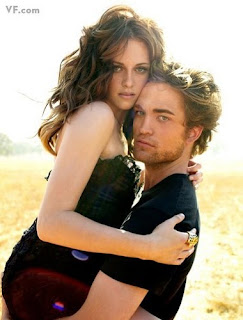 *Spoiler Alert! If you don't want all the juicy details then don't read on!*
Last night I went to see New Moon! By myself. Yes I am a total dork. Loser maybe? I'll settle on dork. And it was divine!
The movie starts off, and its Bella's birthday. The Cullens throw a party for her. As she is opening one of her presents, she gets a paper cut and Jasper tries to attack her. The next day Edward isnt at school and meets her later that day and asks her to take a walk with him. When they get into the forest he breaks up with her and leaves. He does it because he loves her and wants to protect her from harm, but doesnt tell her this.
Then Edward is gone and Bella is in a lot of emotional pain. She screams in her sleep. She becomes an adrenaline junkie when she realises she can see visions of Edward when she is in danger. During this time she spends alot of time with Jacob Black to take her mind off Edward. Soon after, Jacob finds out he is a werewolf and ends his friendship with Bella because he also believes he will put her in danger. Yet soon after that Bella jumps off a cliff to get a vision of Edward, but ends up almost drowning. Jacob saves her and they are friends again.
When Bella gets home Alice is there. She had seen a vision of Bella drowning and thought she was dead. Edward soon thinks that Bella is dead and goes to the Voltori in Italy so he can end his life.
Bella and Alice flee to Italy to save Edward from revealing himself. Bella makes it just in time and saves him from revealing himself. They then meet with the Voltori and the Voltori want to kill Bella and beat Edward up almost to death. Bella agrees to become a vampire and so they spare her.
After that, Bella and Edward are back together and at the very end of the movie... he asks her to marry her! Then it ends!
I absolutely loved this movie, there are some things about Twilight I liked a bit better, I think the cinematography in Twilight was a bit better and I liked the use of the Bella's Lullaby song throughout Twilight. I also think Twilight was a bit more romantic, I liked the music better. But I dont think we could have gotten the effect of the wolves with Catherine Hardwicke at the helm of New Moon so its a bit of a toss up. I wouldn't say that I liked one more that the other, since they are 2 different parts of the story. Both were excellent!
I could watch or read Twilight forever. I am always wanting more. I wish I could climb right into the book and be in Forks with Edward and Bella. Its almost unhealthy. God bless Stephenie Meyer.
Posted by Mary512 at 12:30 PM