PLAYMOBIL: THE SECRET OF PIRATE ISLAND on DVD on OCTOBER 13, 2009 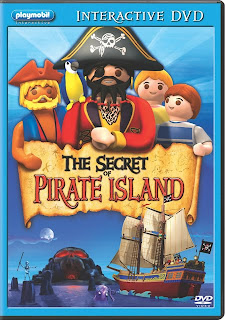 Shiver me timbers!  On October 13, Sony Pictures Home Entertainment will release PLAYMOBIL:  THE SECRET OF PIRATE ISLAND on DVD.

PLAYMOBIL:  THE SECRET OF PIRATE ISLAND brings the characters and sets from the Playmobil Pirate playsets to life in an amazing CGI-animated movie!  The characters are so cute -- they look EXACTLY like the toys and their adventures are just like the ones your children imagine when they play.

And, while  the DVD can be set to play the movie straight through,  PLAYMOBIL:  THE SECRET OF PIRATE ISLAND also includes a special interactive feature which will allow kids to participate in the action by choosing from various options as the story progresses.  With 28 different possible story combinations, PLAYMOBIL:  THE SECRET OF PIRATE ISLAND offers families 28 different adventures on one DVD!

I was pleasantly surprised to receive my Playmobil The Secret of Pirate Island DVD package for review! I received one DVD and press release. This is a completely different type of DVD. It has a setting where you can watch the movie all the way through, and an interactive version. When you watch the interactive version, at different points you will be asked 'What should we do?' and your child picks between 2 options. All in all you can come up with 28 different story combinations! Thats 29 different stories on one DVD. What a great value! The DVD also comes with a Free Kids Buffet offer from Cici's Pizza.

The Bottom Line: My daughter loved this DVD. We've never seen one like it! She loved picking where the story would go next. Thanks Playmobil for letting us review a copy!

* I received one (1) review copy of the Playmobil DVD to facilitate my honest review. No other compensation was or will be provided to me.
Posted by Mary512 at 4:25 PM

Email ThisBlogThis!Share to TwitterShare to FacebookShare to Pinterest
Labels: Reviews