Brand New Spa for You AND your Kids! First Salt Rooms Spa to hit the US 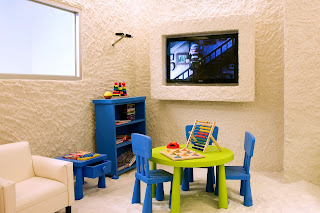 Halo/Air Salt Rooms is the FIRST and ONLY spa in the US that offers health and beauty treatments through Salt Rooms. The Halo/Air Salt Rooms recently opened in the heart of Chelsea at a beautiful store front on 22nd between 6th & 7th avenue . This innovative and unique spa not only offers treatments to adults but children as well in their well furnished Children’s Room. I think your readers would be very interested in this new spa as it can appeal to both themselves and their children.
This treatment is extremely ideal for children as they are receiving the health benefits of the salt, without being dragged to the doctor. The children get to play in a “sandbox” full of toys, games and television while their parents are gaining the benefits as well. It is a natural and safe environment and is a huge appeal of the spa as the parents see their children enjoying themselves while seeking health benefits.
What is Salt Rooms you ask?
The Salt Rooms are entirely lined with salt as salt is blowing into the room as well, for a mist affect that you breathe in naturally. Salt Rooms and caves in Europe are incredibly popular and have been known to help people with breathing problems, like asthma because of the cleansing affect and antibacterial elements of salt. Halo/Air Salt Rooms has imitated these climates with unique features of the natural salt caves.
www.HaloAir.com


Halo/Air Salt Rooms
Grand Opening in NYC
A brand new “Salt Room” wellness facility has just opened in . Halo/Air Salt Rooms is located at (between and ) and all the rooms are made completely out of salt from the salt caves of .
Twenty million years ago, an ocean covered what is now known as . Once the sea dried up, salt was left 10 – 300 meters below ground. These became known as “salt caves” and the air in these environments were extremely clean since they were never exposed to the pollution above ground. The salt caves have a low humidity and salt particles are in the air at all times. This micro-climate is replicated exactly in Ron Rofe’s Halo/Air Salt Rooms.
Salt Rooms are already popular in other parts of the world but this is the first facility of its kind in the . The Halo/Air Salt Room treatment uses unique proprietary equipment and room design which creates a dry salt aerosol microclimate. The patented HaloGenerator creates humidity, filters the air, and grinds and atomizes the salt into air particles for the rooms. All of the salt used at Salt Rooms is mined from European salt caves 300 meters below ground.
The breathable salt particles in the Salt Rooms are able to penetrate into the bronchial tree in the form of finest crystals. This environment provides customers with a relaxing lung cleansing and deep skin treatment. The salt treatment (similar to a sauna) is safe for all ages, and the frequent treatments may help treat a variety of symptoms and ailments including allergies, stress, skin conditions, and respiratory issues.
Ron Rofe, owner and founder of Halo/Air Salt Rooms, was first introduced to Salt Rooms in when his mother was diagnosed with a rare bacterial disease. Finding traditional medicines harsh on her body, Ron’s mother turned to Salt Rooms, which ultimately helped her respiratory system and alleviated some of her pain. Rofe saw potential for Salt Rooms and immediately bought exclusive rights to the HaloGenerator (created by Halo/Med) for the .
About Halo/Air Salt Rooms
Halo/Air Salt Rooms, located in , is the first Salt Room facility in the . The Salt Rooms are made completely out of salt from the salt caves of , and the patented HaloGenerator replicates the microclimate of salt caves. Opened in January 2010, the facility’s hours are Monday – Saturday from , and Sunday from . The adult session is 60-minute, and the children’s session is 30-minutes. A single session is $99.99/treatment, 5-pack is $89.99/treatment, and 10-pack is $79.99/treatment. The Halo/Air facility is equipped with two single rooms and two double rooms, with cable TV, radio, and dimming lights. The children’s room is equipped with a plasma TV, toys, games, and comfortable couches/chairs.


Halo/Air Salt Rooms
Fact Sheet
To seek the maximum benefits it is recommended to come between 4-14 times.
-Courtesy of Halo/Air

Email ThisBlogThis!Share to TwitterShare to FacebookShare to Pinterest
Labels: travel